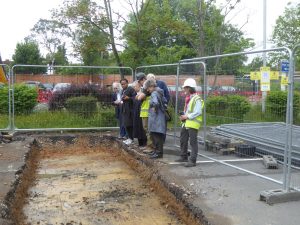 Some of you might have been wondering this week why large trenches had appeared in Waxwell Lane Car Park.

As part of the planning permission to develop the Car Park, an exploratory dig has been carried out.

For those of you hopping that a distant cousin of Richard III would be uncovered, no such luck!

A few artefacts were recovered but not of great significance.

Members of Pinner Association Committee along with representative from Pinner Local History Society and Pinner Local where given a tour of the site on Wednesday morning by the archaeologist.

Three trenches were dug to a depth of 16” (40cm). The location of the trenches was decided by analysing historic maps. 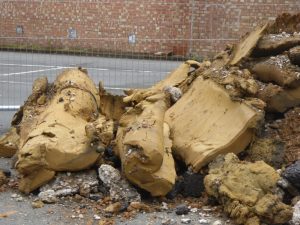 What we did discover is that there is a lot of clay.

The car park should be back to normal on Monday.

This site uses Akismet to reduce spam. Learn how your comment data is processed.

Check out our new section to see what local amenities are open.