The new MOPAC – MPS Access Strategy has been published today (1st November 2017).  In this it is stated that the local community will be re-consulted on whether Pinner Police Station front counter will remain open, manned, as now, by volunteers from our community.

Of course, if the front counter does remain open the building cannot be shut and sold off – so watch this space for more news of the re-consultation and make your views known when that opportunity arises.

The Pinner Association submitted a detailed response to the MOPAC – MPS recent consultation on their new “Public Access Strategy”.  Our response was acknowledged by our Nick Hurd, MP, Minister of State for Policing and the Fire Service, in his letter of 11th October 2017 to Sophie Linden, London’s Deputy Mayor for Policing and Crime: 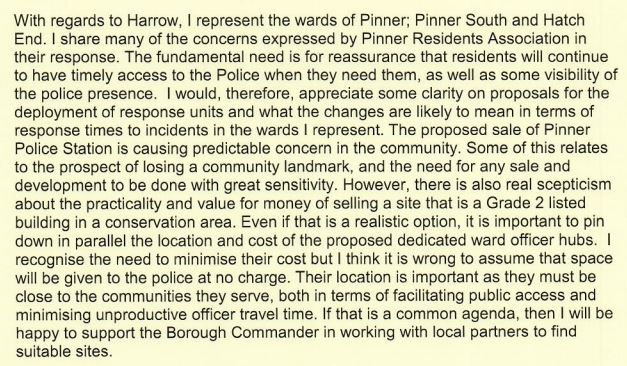 The parts of the document that particularly relate to policing in Pinner and Pinner Police Station are:

“This strategy sets out the current state of public access and where we want to get to. Our public access offer to Londoners brings together the existing telephone contact methods, which accounts for the majority of police Buy drug tramadol online ireland contact, with new online ways of reporting; at least two Dedicated Ward Officers in every community, based closer to their wards and equipped to work and engage with the public on the go and at notified times and places; and one 24/7 front counter in every borough.”

“During the consultation process it became clear that local operational police decisions had been taken to operate Ruislip and Pinner police stations as volunteer-led front counters. As such, these did not appear in our original list of front counters, we were proposing to close. Our proposal will be to close these front counters due to the reasons previously provided. Although we did receive some representations about them during the consultation process, we will re-consult locally in those communities prior to making decisions about them.”

“Where front counters are closing, we expect to close them on 14 December, in line with the commitment we made in the draft strategy to implement changes quickly in order to provide certainty and maximise savings. For those where we are committing to further local engagement – Pinner and Ruislip – front counters will stay open.”

Further information will be posted as soon as this is available.