It seems that the powers that be have at last realised that the wind may not blow at times of peak  electricity demandand that all these expensive wind turbnies will be able to contribute and are therefore contemplating power cuts.  One of our members has already suffered and offers the following suggestions for being prepared in the event of others becoming victims: 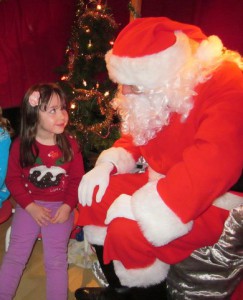 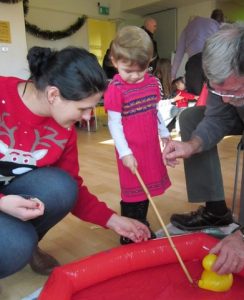 Santa’s Grotto at West House, Pinner attracted over 150 children on Saturday 13th December. The event, sponsored by Alexander Watson Estate Agents, has taken place for many years and is organised by the Friends of West House.

Lucy Patten, organiser, praised Santa’s Elves who had staffed the stalls and ensured that Santa saw a regular stream of excited children. ‘Everyone pulled together and made sure the children had a wonderful time. As well as thanking our regular volunteers, I should like to welcome Niamh McEnery and the HAWI who were helping for the first time.’ The favourite stall was ‘Hook a Duck’; others included Spin the Needle and Bauble Decoration.

Commenting on the event, Niamh McEnery said, ‘I really enjoyed it and I believe the others did too.’ One parent posted on Facebook, ‘Who knew FC has a steam powered computer, I learnt something! He was a brilliant FC and no queues or ridiculous attempts to flog over-priced merchandise. Win win!!’ Other parents praised the warm and friendly atmosphere and quality of Santa’s presents.

As well as providing a local Grotto for families, the Friends of West House were raising money for the Heath Robinson Museum, due to open in the park in 2016.

The planned closures of some libraries in Harrow was publicised in an article in the Harrow Times. Many local residents went to Pinner Library  9th December to a ‘Consultation’. The chief hatchet woman whose job is to close libraries was there.
The meeting  was very well attended, including some pupils from West Lodge School with their teacher.  Due to popular demand a proper meeting was held, rather than a one to one “drop in style” meeting.  From Harrow Council two senior officers were present, Marianne Locke, Divisional Director for Community and Cultural, and Tim Bryan, Service Manager, Libraries, Sport and Leisure, but no elected representatives.  Questions ranged from the reason for the need for Harrow Council to make such severe budget cuts and how the Council could save money on their own administration, to why Libraries were so important as centres for information and contact with the Council, and how much Libraries are valued by school pupils.
It was agreed that another meeting would be arranged at Pinner Library after Christmas, to held in the evening when a wider cross section of Library users may be able to attend, and that a senior elected representative from the Labour Party (in administration on Harrow Council) would be at that meeting to answer questions.

Whether or not you have Christmas in mind, the Exhibition of Arts & Crafts by Local craftsmen warrants a visit before it closes at 4 pm tomorrow, Sunday 7 December. 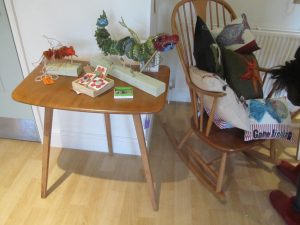 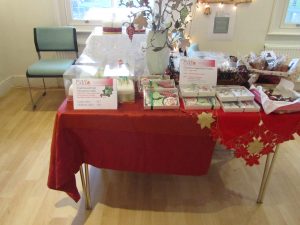 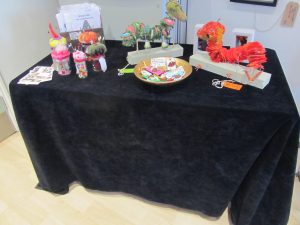 And next Week end, on Saturday 13 December, West House hosts Santa’s Grotto from 11am to 3.45pm.