The Pinner Association understands that, as last year and due to the current Covid-19 pandemic restrictions, Pinner Fair will not be held on 2nd June 2021.

However, contrary to the “urban myth” that by not holding the fair the charter granting the right to hold a fair would lapse, this is not the case and therefore Pinner Fair could be held again in 2022 (Covid permitting).

The article below is taken from our magazine The Villager (edition 249, March 2021) and explains why Pinner Fair will continue in future despite the effect of the pandemic curtailing the festivities in 2020 and 2021:

Pat Clarke’s scholarly article in The Villager (edition 247, July 2020) about the Royal Charter establishing Pinner Fair in 1336 posed the question whether legislation would be required to abolish it.  This set me thinking. 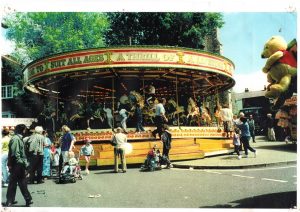 Knowing that legal machinery existed to achieve this change, I was sure there would be a simple answer to Pat Clarke’s question and was prompted to re-read the late Jim Golland’s informative and entertaining book “Fair Enough”*.  Sure enough, this provided the answer.  Attempts to abolish the Fair have been made in the past but always without success.

The Fairs Act 1871 empowered the Home Secretary to abolish a fair if it was thought to be “unnecessary or injurious to the public” or that its abolition would be “for the convenience and advantage of the public”.  Representations accordingly had to be made by the local magistrates.  The passing of the Act precipitated the abolition in 1872 alone of some seventy fairs (including the one at neighbouring Harrow-on-the-Hill, which was alleged to be “to the detriment of the morals of the neighbourhood”).  From 1894, the Act was amended so that representations to the Home Secretary were to be made by local councils rather than by local magistrates.

It was the Fairs Act of 1873 that empowered the Home Secretary to change the date of a fair.  It was presumably pursuant to this Act that the Home Secretary of the day agreed, in 1972, to the change of the date of Pinner Fair from the Wednesday after Whitsun to the Wednesday after the Spring Bank Holiday.  (It had at some previous time been changed from the 24th June and the Charter had originally provided for a three-day fair, from the 23rd to the 25th June.)

The answer to Pat Clarke’s question thus appears to be that Harrow Council would need to persuade the Home Secretary (no doubt in the face of vehement counter-representations by interested groups) that the Fair was “unnecessary or injurious to the public” or that its abolition would be “for the convenience and advantage of the public”.  It could then be abolished pursuant to the Fairs Act 1871 (as amended).  Given the enthusiasm of most Pinner inhabitants for their fair, and its increasing popularity with the public over a much wider area, however, let us hope that this never comes to pass!